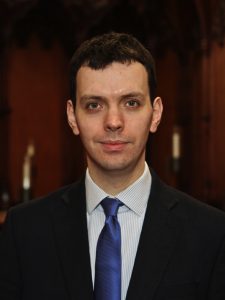 Tom Winpenny (Musical director) is Assistant Master of the Music at St Albans Cathedral where his duties include directing the acclaimed Abbey Girls Choir and accompanying the daily choral services. Previously he was Sub-Organist at St Paul’s Cathedral, where he played for many great state occasions. He has broadcast regularly on BBC Radio and has featured on American Public Media’s Pipedreams. He was Organ Scholar at King’s College, Cambridge, graduating with a music degree and twice accompanying the Festival of Nine Lessons and Carols, broadcast worldwide. He won First Prize and the Audience Prize at the 2008 Miami International Organ Competition and is an organ tutor to the annual Eton Choral Courses. Recent solo recital venues have included Birmingham Town Hall, Norwich Cathedral, Kristiansand Cathedral (Norway) and Hildesheim Cathedral (Germany). He has also appeared as organ soloist in John Rutter’s Christmas Celebration concerts at the Royal Albert Hall. His many recordings include discs for Naxos of choral works by Felix Mendelssohn and William Mathias and Messiaen’s organ cycles La Nativité du Seigneur and L’Ascension.

Martyn Noble (Accompanist) is currently Sub-Organist at H.M. Chapel Royal, St. James’s Palace, Accompanist and Teacher of Organ at the Royal College of Music Junior Department and Musician-in-Residence and Teacher of Piano at Highgate School. In the UK, he has given Organ recitals in many Cathedrals and churches, he has also played in Paris, Leiden (Holland), Budapest, Brussels, Germany and Northern Ireland and has played with the Royal Liverpool Philharmonic Orchestra.  In 2015, Martyn graduated with a first class BMus degree from the Royal College of Music and has since appeared live on BBC Radio 3 and BBC Radio 4 and has recorded several choral CDs with Priory, Signum and Delphian Records. Last year, Martyn became a published composer and has had several choral works published by Chichester Music Press including a mass, evening canticles and anthems (these can be viewed by visiting www.chichestermusicpress.co.uk). He has received premieres at St. James’s Palace, Exeter University and the Royal College of Music and his works have also been accepted to be a part of the London Festival of Contemporary Church Music this year.

Home » About us » Musicians